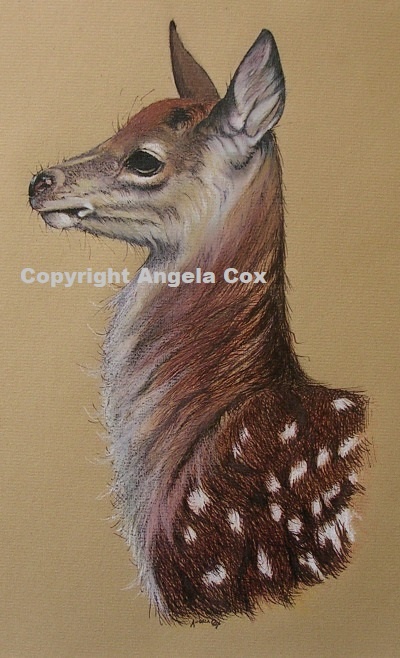 These animals can be observed with patience and a little effort on Exmoor. The tiny calves themselves are commonly left ‘lying low’ in the long grasses for protection.

The Eastern or Mountain Bongo is a striking and beautiful antelope from one remote region of central Kenya. It is one of the largest forest antelope and the interesting markings on the rich, chesnut coloured coat help them to be camouflaged in the sun-dappled light through the forest vegetation. 'Bongo' is derived from a west African native name. The male and female of this species have incredible horns that form graceful and gentle spirals. Their very large ears help to sharpen their hearing when their vision can be obscured in the forest vegetatation. The animal that I have portrayed in the drawing is a calf and had the most intense and captivating gaze, being particularly interested in me as I sketched and took notes. This beautiful species is highly endangered in the wild. 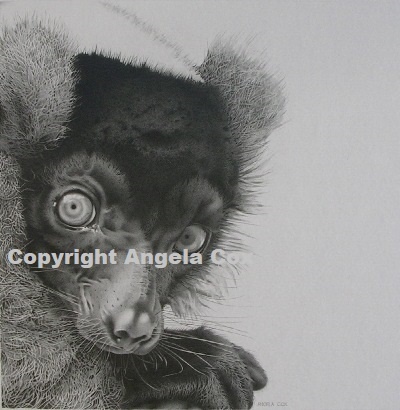 One of the largest primates of Madagascar. They live in tropical rainforest in the North East of the island on the Masaola Peninsula.  They keep in touch with neighbouring groups of Red-ruffed lemurs by loud and raucous calls - having differing calls for a variety of threats. Interestingly, they don't carry their young around with them but leave them in a nest of leaves while the adults go and find food. In this drawing, I wanted to focus on the engaging 'stare' of these beautiful creatures and try to evoke the sense of steady curiosity with which they seem to view their environment. Being primates, they have the most fascinating hands and I feel that I could study them for many hours, and the wide variety of ways that they are held when in a resting position. 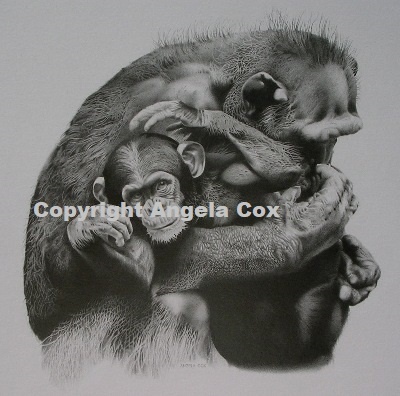 This drawing shows a female chimpanzee with her baby and I wanted to convey the attentive and gentle nature of their relationship at this stage. The female is looking down in a somewhat pensive way, we might imagine, but the youngster is stretching and wriggling to release the female's grasp. The baby went on to explore their surroundings further. I feel that the face of the baby inspires me to wonder at their lives and to hope for a brighter future for these amazing and complex creatures, that are currently endangered in the wild.

'Hope' - Shortlisted for David Shepherd Wildlife Foundation 'Wildlife Artist of the Year' 2012 & Runner Up in the Best Non-British Wildlife (all mediums) at MIWAS Annual Exhibition 2013. 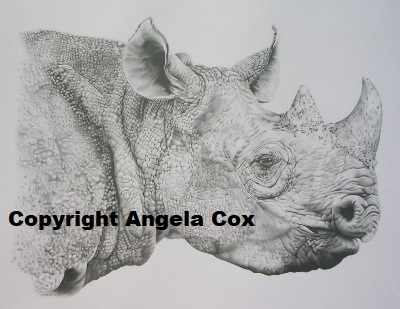 These huge herbivores inspire so many different emotions. One can only be amazed at their sheer size and strength coupled with their surprising turns of speed. In complete contrast, I was very moved when studying some of these beautiful animals as I was able to just hear the almost inaudible sounds made between this calf and it's mother as they grazed alongside one another. The small noises seemed measured and were, perhaps, reassuring communication between each other. Who would think that such powerful animals could have such a peaceful side? My encounter with these handsome animals inspired this drawing and I hope that it goes some way to convey the gentle side of this animal's nature. In the process of observing mother and calf I became engrossed by the varied textures and patterns across their skin which, when the two animals rubbed against each other, sounded like huge sheets of extremely rough 'glasspaper!' Beautiful creatures, no less, that have my deepest respect and admiration. I feel truly sad when I think of the vast numbers that are being lost to poaching . Currently, very dark days for these majestic beasts.

These ever entertaining little creatures are much admired by the artist for their tenacious nature and their ability to live in one of Earth’s harshest climates. 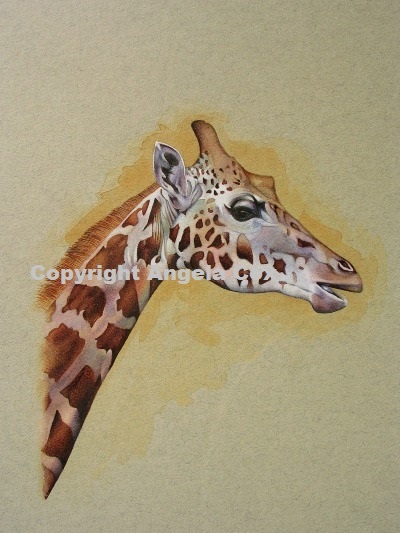 This is one of the most threatened giraffe sub-species, with only a few hundred left in the wild in Kenya and Uganda. The striking patterns on the coat are different on each animal. I was inspired to paint this picture after studying some of these fascinating creatures in a local zoo. 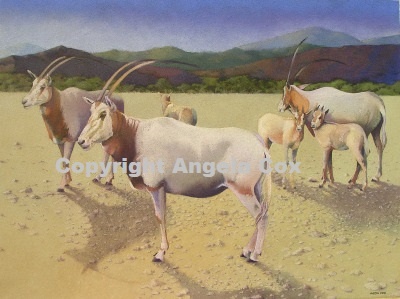 Named for its graceful, curved horns. They were once one of the most common large mammels in North Africa. They lived in sub-desert areas, in dunes and wooded depressions between dunes and grassy steppe. Their pale white coats help to reflect the intense heat of the sun and their broad, divided hooves prevent them from sinking into the soft sand. At certain times of the year they would form herds numbering hundreds of animals but they were classified as extinct in the wild on the IUCN Red List 2007. Having seen some of these handsome animals in a captive herd and reading of their very sad demise in their natural environment, I felt moved to portray my own interpretation of a small part of a herd enjoying a relaxed moment together.